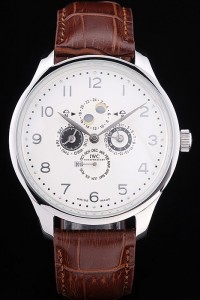 Since 1868, the IWC watch factory stores important spare parts of watches produced, in order to ensure the precise timing for IWC watches for many years in the future. In the 1960s, IWC launched various titanium watches, including the “Ocean” series for divers, the “Vtra sportivo” watches and the “Portofino” series. The recent introduction of the world’s first diving watch with mechanical depth gauge also shows the extraordinary creativity and superb craftsmanship of watch making.
When IWC launched the first pocket watch in 1868, it started getting special status in many aspects of the Swiss watch industry, and also in the world’s watch manufacturing industry.

This world-famous watchmaker has chosen an idyllic small town on the Rhine bank for its factories, which puzzles many people. Since the factory site is far from the famous Swiss watchmaking center district, and also the name of IWC (International Watch Company) does not look like a common name for a Swiss company, many people are curious about its origin. The American youth from Boston, Florentine Ariosto Jones, a master watchmaker with a pioneering spirit, great ambition and keen commercial antennae, already has a perfect plan in his mind when taking a boat across the Atlantic to Europe. When Swiss was in the low-wage economy era, he made use of modern American production machines to manufacture extremely accurate pocket watch movements, and set off a watch revolution at that time.